Community Approach to Preserve and Protect Culture Heritage in Afghanistan

Before, cultural heritage was merely looked at asa source of income. Today, its role as an active agent of social transformation has been increasingly recognized, and culture and heritage are considered as basic needs.The history and archaeology of Afghanistan stretches back more than 40 millennia. The people, monuments, archaeological sites and literature all bear witness to the multiple layers of an extraordinarily rich cultural heritage in Afghanistan.However, the great potential for cultural development inAfghanistan is currently being undermined and has had to endure unimaginable loss in the past, but yet it has remained subject to deliberate destruction, pillage and neglect throughout the decades of war, civil unrest and insurgency into the present. Despite best efforts, several monuments identified by UNESCO and the Afghan authorities as being of worldwide significance have either been destroyed or continue to be at risk of collapse because of a combined lack of both resources and expertise to ensure the provision of the necessary emergency conservation and safeguarding measures. 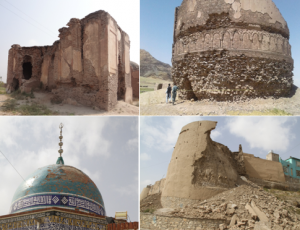 According to BRD rapid assessment of the tangible culture heritage sites at high risk in diester prone provinces, supported by the Prince Clause Fund (PCF), most of the culture heritage site remained in the status of collops, and required quick response for protection and stabilization, but there was no measure in place by the responsible institutions or other organizations, due to lack of resources, capacity, insecurity and accessibility because of the on-going conflict, including the lack of skills, knowledge and expertise for provision of firsts aid to preserve and protect  culture heritage in time of crises and emergencies.To address the needs for timely response to protection culture heritage, engage local communities and civil society using community approach and provide emergency response to culture heritage in the risk of collapse BRD has already signed a long term Memorandum of Understanding (MoU) with the Ministry of Culture, Information and Youths, for supporting the department of culture heritage, through capacity building, damage assessment, emergency response measures and community engagement in Afghanis

Advocacy for Protection of culture heritage using Human Rights Based Approach
Using its rights based to protection of culture heritage BRD is engaged in advocacy at the national and international platforms to promote universality of the culture herniate and engage key ...
Rapid Assessment of Culture Heritage At Risk;
BRD through the support from the Prince Clause Fund and collaboration with the department of Culture Heritage conducted damage assessment mission of cultural heritages in Afghanistan: where 19 cultural heritage ...
Sensitisation, Raising Awarness and Train Civil Society and Communities
In fragile states such as Afghanistan with on-going conflict, where most of the tangible and tangible and intangible cultural heritage are remained in acritical high risk, in such a context the ...
Emergency Response to Protect Culture Heritage Sites at High Risk
According to BRD rapid assessment of the tangible culture heritage sites at high risk in diester prone provinces, supported by the Prince Clause Fund (PCF), most of the culture heritage site ...
Enhance Capacities Emergency Response to Cultural Heritage in Emergencies in Afghanistan
Cultural heritage in Afghanistan continues to be at risk of collapse due to the current intensified conflict, frequent disasters, and lack of both resources and expertise to ensure the provision ...