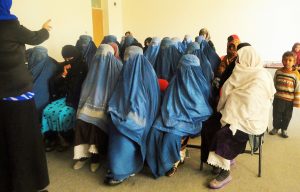 The on-going conflict has killed millions, obliterated most of the country’s infrastructure and placed Afghanistan at the bottom of nearly every measure in the Human Development index, including infant mortality, maternal mortality and literacy rates. It has also created the world’s largest refugee population.A humanitarian crisis of incredible proportions has grown even more complex and severe since the Taliban took control. Job losses, lack of cash and soaring prices are creating a new class of hungry in Afghanistan. [1]According to WFP update on food insecurity, 22.8 million Afghans or more than half the population are not consuming enough food. The country is on the brink of economic collapse, with the local currency at an all-time low and food prices on the rise.  Acute malnutrition is above emergency thresholds in 25 out of 34 provinces, and is expected to worsen, [2]according to UNICEF during the past 4 months 3.3. million children had no access to sufficient food. Women and girls face great uncertainty when it comes to respecting their rights to education, livelihoods, and participation. [3]Some 4.2 million young Afghans are already out of school, from which 60 percent of them aregirls.  There has also been a decline in girls’ secondary school attendance, even in provinces where the de facto authorities have permitted them to attend schools due to the absence of women teachers, since in some locations girls are only allowed to be taught by women.

BRD engagement to respond to the current humanitarian crises in Afghanistan: BRD as a rights based organisation, operating for 20 years in Afghanistan , in different sectors and still has strong presence in the ground.  We are also in the process of  re-proposing some of our projects  which was on-going before the collapse to respond the current humanitarian crises.BRD is also open for any collaboration with UN and International humanitarian organisations using our local expertise and capacity can increase the effectiveness of humanitarian response.

Our current interventions  to contribute in responding  to the  current humanitarian crises in Afghanistan are as bellow:

Cash for Work : Rehabilitation of Culture Heritage Site
Under  our program emergency response to culture heritage in risk, has been re-resumed, after 5 months delay due to fall of the government in the hands of Taliban, in August ...
Read More
Advocacy for Urgent Humanitarian Response in Afghanistan
BRD to gather with other diasporas led organization, advocating for the urgent delivery of humanitarian assistance to Afghanistan using a transparent and accountable mechanism.
Read More