Afghanistan has been in protracted conflict for almost thirty-five years, which has seriously hampered poverty reduction and development, strained the fabric of society and depleted its coping mechanisms. Additionally, over the past five years, armed non-state actors have challenged the territorial control of the Government and expanded the geographical scope of the conflict beyond the southern and eastern regions of the country.

Consistent with last year’s trends, however, ground engagements continued to cause most civilian casualties followed by improvised explosive devices and suicide and complex attacks.

In addition to high numbers of civilian casualties and huge population displacement due to conflict, 2017 continues to bear witness to restricted access to health and education facilities, with 17 conflict-related incidents targeting health-care or health-care workers recorded within the reporting period. Forced displacement is reported from 29 out of 34 provinces and 58 per cent of all displaced people are girls and boys under 18.

According UNDP’s Human Development Report 2015, Afghanistan ranks 171st out of 188 countries surveyed. Factoring into this low score are endemic challenges of poverty (36%), low participation of women in the national workforce, a high dropout rate for children and inadequate healthcare.

Despite some progress, human security remains Afghanistan’s major challenge. Some districts remain inaccessible due to continuing anti‐government activity. Afghanistan faces an uncertain economic outlook. Growth has slowed considerably and unemployment is on the rise. Ongoing insecurity hampers investment and encourages many of the most productive and well-educated citizens to migrate.

The World Bank estimates that growth in 2016 will be below 2% percent and will remain low in the medium term. Declining levels of international support have reduced demand and contributed to deflation, which is likely to exacerbate an unemployment rate already at 40 percent.

Women still face widespread discrimination and human rights abuses. Most girls remain out of school, women are largely restricted to low-paid, unregulated employment, harassment is widespread, political participation is limited, and women face numerous obstacles to getting fair treatment from the justice system. In addition, women are often shut out from effective and gender-responsive healthcare – particularly in rural areas, where a lack of facilities and trained female healthcare providers remains a serious barrier improving health outcome.

Access to justice remains limited, particularly for the poor, those in isolated areas and women. There is only one lawyer for every 11,000 people and a need for greater capacity among legal professionals and relevant government institutions. Legislation is often contradictory or fails to comply with international best practices and Afghanistan’s international obligations. Awareness of human rights and legal procedures is low and compounded by high rates of illiteracy. As a result, traditional justice bodies, whose verdicts sometimes conflict with human rights standards, settle 80% of disputes.

Afghanistan is among those countries most threatened by climate change. Despite an abundance of renewable energy possibilities, including wind, water, solar and biomass, inadequate technology, policy and management capacity mean they are not being properly exploited. Forest coverage has been decimated, very little land is available for farming, and environmental degradation and poor management of natural resources have left a legacy of pollution and public health issues. 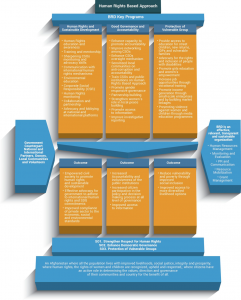