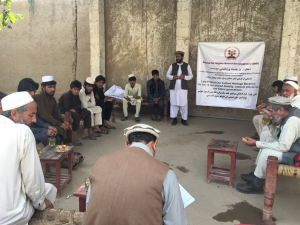 In fragile states such as Afghanistan with on-going conflict, where most of the tangible and tangible and intangible cultural heritage are remained in acritical high risk, in such a context the communities, civil society have an important role to play to preserve and safeguards culture heritage in their respective villages and districts. If they are sensitized and educated on the value and importance of the cultural heritage and provided with basic skills on protect culture heritage in high risk. BRD already adopted a community- approach to preserve and protect culture, by  sensitizing and educating local communities on the importance of culture heritage as national identity, their role and responsibilities as key stakeholder, for taking proactive role in safeguarding all aspects of the rich Afghan culture heritage, which serve as a source of history and identity for future generations and as a platform upon which to build a culture of peace and sustainabledevelopment. –  Community approach for protecting and safeguarding cultural heritage; mainstreaming community sensitization and education of local communities to take a greater role in safeguarding and protecting cultural heritage in their villages and districts through BRD’s community based natural resource management program implemented in Balkh and Ningarhar provinces of Afghanistan;

Bureau for Rights Based Development (BRD)

Bureau for Rights Based Development (BRD)Follow

Today is World Earth Day!
Mother Earth is clearly urging a call to action. Nature is suffering. Let's not miss the opportunity to limit global warming - let’s save our planet together.

🌍On the 50th Anniversary of #EarthDay & as part of @LetsDoItWorld and the @EarthDay Network under the #RestoreOurEarth theme, we are pleased to express our commitment for promoting #environment and #ClimateChange literacy.

📰Please find attached our #PressRelease below!

The Bureau for Rights Based Development (BRD) is a non-profit, non-governmental human rights-based organization operating in Afghanistan & Sweden 🇦🇫🇸🇪

Today is World Creativity and Innovation Day! On

Cultural heritage in the context of human rights -

Protecting and preserving cultural heritage is a v

Due to the widespread poverty in Afghanistan, chil

🏏 Yesterday was International Day of Sport for

The Citadel of Herat (سکندرۍ کلا), or Qal

Women in Afghanistan continue to be vulnerable. BR

💬 The responsibilities of all citizens in a dem

💡Every year we can witness light-off moments wh

March is women’s history month and we wanted to

BRD’s approach to #development is the Human Righ

Having a marketable skill can improve a person’s

Years of conflict in Afghanistan have devastated t

This year @unitednations invites us to #FightRacis