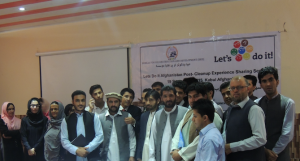 The purpose of the program   building capacities for the civic action is to educate and engage citizen and other stakeholders such as civil society, government institutions, private sector, media including key politicians and religious scholars in cleaning their own home, city and country as whole.The program has been initiated in collaboration with  Let’s Do It World Movement in October 2014. The team developed its 3 years action plan in 2015 and through the technical support from the Let’s Do It World Foundation and financial support from the Estonia Ministry of Environment, the Let’s Do It Afghanistan managed to establish national and provincial teams in 10 provinces, provided them with capacity, who is now responsible fro coordination and organization of cleanup campaigns every year, including the coordination and communication with the stakeholders continued community mobilization.

Bureau for Rights Based Development (BRD)

Bureau for Rights Based Development (BRD)Follow

Today is World Earth Day!
Mother Earth is clearly urging a call to action. Nature is suffering. Let's not miss the opportunity to limit global warming - let’s save our planet together.

🌍On the 50th Anniversary of #EarthDay & as part of @LetsDoItWorld and the @EarthDay Network under the #RestoreOurEarth theme, we are pleased to express our commitment for promoting #environment and #ClimateChange literacy.

📰Please find attached our #PressRelease below!

The Bureau for Rights Based Development (BRD) is a non-profit, non-governmental human rights-based organization operating in Afghanistan & Sweden 🇦🇫🇸🇪

Today is World Creativity and Innovation Day! On

Cultural heritage in the context of human rights -

Protecting and preserving cultural heritage is a v

Due to the widespread poverty in Afghanistan, chil

🏏 Yesterday was International Day of Sport for

The Citadel of Herat (سکندرۍ کلا), or Qal

Women in Afghanistan continue to be vulnerable. BR

💬 The responsibilities of all citizens in a dem

💡Every year we can witness light-off moments wh

March is women’s history month and we wanted to

BRD’s approach to #development is the Human Righ

Having a marketable skill can improve a person’s

Years of conflict in Afghanistan have devastated t

This year @unitednations invites us to #FightRacis